Well… After I wrote the previous post, I started to think about the home and the weapons that were not reflecting the player’s inventory… It was really not a problem but the more I was thinking about it, the more I wanted to change it. So it’s done!

Here is my customized character:

And here is the home screen:

Alright, tomorrow I’ll work on the app icon and the trailer!

I did some polish on the home menu. So here is the last look and feel.

I’ll release the game under the name “Cat Killer”. I mentioned it before but at some point I felt like changing. It may seem a bit aggressive and killing cats is obviously a bad thing. But honestly, I could not care less so I stopped thinking about it. Still, other candidates were “Cat Slayer” and “Killer Kills”. Right, I didn’t have much imagination there anyway.

Right after the Title Screen, the single player screen is displayed.

From there the player can access to the levels (“Start”) or to the training room (“Training”). On this screenshot there is also a reset button. It’s only for my testing. It allows me to clear the saved data (Unity’s PlayerPrefs) and thus reset the game by launching the Tutorial scene. It’s convenient especially when I’m testing on iOS. On Android it’s quite easy to clear an app cache while on iOS it seemed to me the only option was to uninstall the app and re-install it… If there was any other option, Apple didn’t make it obvious!! Crazy.

The rabbit displayed there reflects the clothes and the colour from the player’s customization. The sword and the gun though are always the same. I will probably spawn the actual weapons in the future. It’s just I didn’t feel like attaching the gun muzzle to the gun barrels programmatically. To put it simply: I was lazy. Right.

Well the first version of the game won’t be released with any multiplayer mode. But I implemented the whole thing using Photon Pun, so it should be almost ready for that. To be honest in the past months I didn’t test this anymore since last time.

I plan to get back to it only if reviews are good!

At first, I thought I would do the level chooser as a level map in 3D with some assets from the levels themselves. Yeah right. Truth is it would:

That being said, I still like the idea. It’s just it would require lots of time to make it nicely and have a proper navigation (with less clicks to reach a level).

So I decided to go with the cheap solution: level buttons! 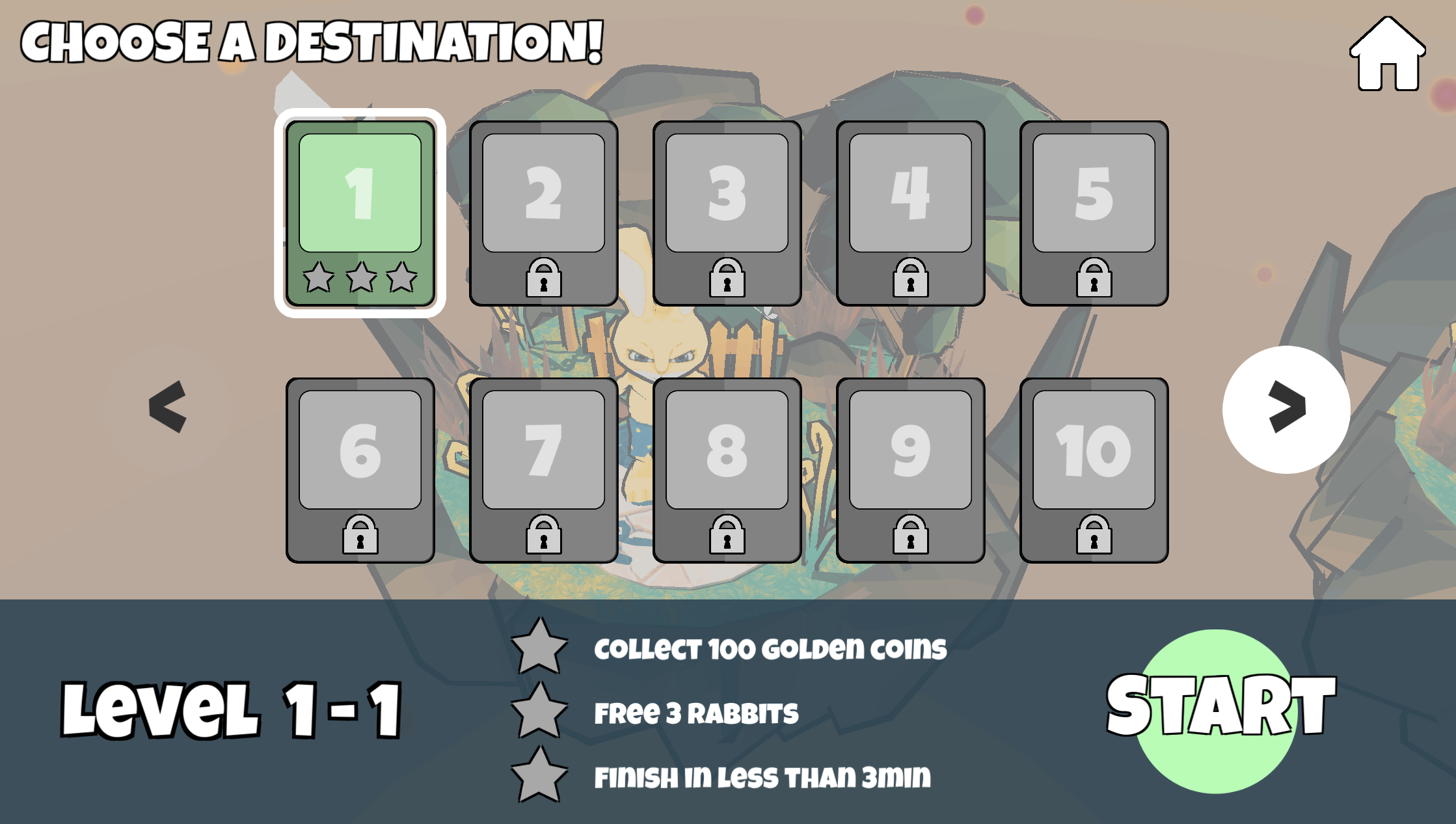 As you can tell each level’s rating is based on the goals to achieve. Each level will have different goals. But I think “Collect X golden coins” and “Free 3 rabbits” will be the most common.

Alright, I’ll now do sample level and see if the whole logic is properly working!