Alright, most of the early reviews of the game show people really don’t fancy the controls.
To be honest, after playing so many hours with gestures, I really have a hard time on some levels playing with sticks. But still, here are the sticks:

A new menu has been created to unlock and select combos. Following these new changes, I decided to lock the aerial combo by default. Sorry for that.

The update I’m preparing is not just about the controls by the way. This version will be named 2.0 due to the number of updates.

So here are the changes to come:

I just finished the boss for this last level of the Third chapter. I feel like it’s the end of the journey already!
I won’t do other levels if the feedbacks for the game are bad, so maybe it’s simply the final boss of the game 🙂

The boss is a shaman I introduced in an older post, so there is nothing new! I just made some more animations and polished a bit his AI.

I wanted to make it a bit more “bossy” with a variety of attacks and some patterns to identify. It’s probably the enemy that is the closest to how I see bosses. It’s not an enemy I can easily recycle in other levels.

The shaman can basically:

The sequence gets changed when the boss has less than 30% of life. From that moment, the laser beam will be used often. The trick is to use the rocks to find a shelter. But doing so you can’t hit the boss, right?

It should be good enough to stop making levels!

I didn’t post the level 3-9, I’m probably a bit bored. But anyway it’s just another level with cats and spiders to kill. Nothing fancy.

The level 3-8 is focusing on the block moving mini game. Here the player has to move the block from the beginning of the level till the end. Once the end will be reached, a timer will start and the player will have to go back to the level start point. Everything else is game mechanics recycling.

I reworked a bit the level 3-6. Here is the final version:

I know I did way too many levels for a first version. It’s just that it’s actually fun to do and somehow delaying the commercial failure feels good. Haha. Still, here is the plan:

If I work seriously starting Tuesday (I’ll be off), maybe I can finish everything by next week! 🙂

The block moving mini game is reused here with a more complex puzzle. You first need to move the block to make a bridge, go up activate the switch to open a door and finally move the block to avoid the laser. That’s a really nice part of the level I think!

Then it’s just about some battles and a door with a password to find. I already completed the first part of the level.

The second part is introducing the mecha as I mentioned in my previous post. Finally!

I spent a bit of time to add some sounds to it. It was missing. Now each step makes it look so real it seems alive 🙂

I reused the first tutorial here. The gameplay of the mecha is quite close to the one of the character. The main difference is that the player can fire in any direction. Here the robot will have to be rotated first.

I should be able to finish this level tomorrow evening after work! 🙂

Enemies can now enter a state where they are vulnerable. On regular enemies you simply have to dash on them to get them stunned. On bigger enemies such as the “charger”, as before, he will enter a stunned state when hitting a wall. The stunned state is indicated with a white outline! 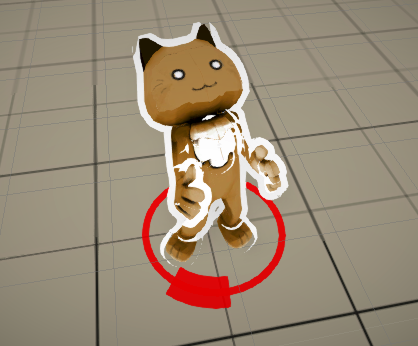 At last ! That’s something I wanted to do for such a long time… Since I’m a total beginner with animations I always thought it would be quite a challenge to handle this type of behaviour. At some point I even convinced myself it would be a bit like Resident Evil 4, where the character can only shoot when not moving. But in the end I couldn’t stand it anymore.

I’m quite excited because the gameplay is getting more “dynamic”.

I did the same thing for the slashes. So it’s possible to use the sword while running. It won’t stop the character from running. To stop him, you’ll have to simply tap on the stop location you want.

I also changed the enemy’s armors logic. The dash isn’t doing any damage on armors anymore. This way the player has to get close and use a regular slash! I want to prevent the player from only using the gun and the dash.

Here comes one of my features I find both cool and disturbing !

Something I didn’t say so far is I want my game to be something you can play with one single finger. That’s why I’m trying to make sure you can play it in a portrait mode. But when it comes to landscape I don’t just want to scale the view and keep the same rear camera. So I shifted the view to the side.

This will ensure you can properly move the character forward/backward easily on both orientations. Before it was tough to move forward in landscape if the level was linear and “made” for portrait. If you want to remind how it was in landscape, check here.

For me it’s an additional gameplay feature that is drastically changing my view on the level design. Now I’ll be able, for example, to hide things you can only see in portrait or landscape. I’m already imagining a boss whose weak point is moving (sometimes accessible in portrait, sometimes in landscape). Both anoying and interesting I think. But I’m still far from making bosses anyway 🙂

Since I’m just in the process of coding various things I cannot show at the moment, I just felt like posting this gif showing a short testing session on my proto map with some cats.

This cat enemy is done. I think I’ll just twick its parameters in the future but I have every animations I required for it (from idle to death).

Well, I said “I was done with this cat” but actually I’m using it as a base for other enemies. For example, at the moment I’m making an armor for this cat. Cats with armors will be unsensitive to guns and deflect bullets. You’ll have to go to close combat and use the sword to break the armor before making damages. And I have tones of other ideas for the enemies reusing the same mesh !

Man… My Internet connection was down the whole weekend… I couldn’t upload the video earlier nor check MSDN when needed, nor check my mails, nor play Gears Of War 3 online with some friends. Then, I just went to a park with people and ended the weekend in some pubs with friends. Yeah, I failed to be a normal no life. I swear : Internet is a drug ! And it’s back ! 🙂

Here is a simple video of the game. It’s still “Work In Progress” but you’ll, at least, get the main idea.

The sounds are placeholders ! Some are really bad (especially the one on level up, huh ?). I hope I’ll be able to get some nice loops and be able to change the music every level (3-4 loops will be enough I think).
The difficulty right now in the Arcade mode is really easy. I’m going to do some tuning to make it a bit harder.
Some bonuses didn’t appear during the video but, in the Arcade mode you may also get a “Time” bonus and an other character. Well, nothing really important there…
By the way, you won’t start an Arcade game with bonuses in the inventory (I did it only for the video’s purpose).

I’m still working on the puzzles (I created 29 over the 64 I need). And I changed some of them since I made the video.